Few Nigerians might not be aware of the ongoing crisis in the upper chamber which took a new turn with the suspension of the former Senate leader; Senator Ali Ndume. Listed are 3 Senators who plotted Senator Ndume suspension.

The Senate committee on Ethics and Privileges looked into the allegations of certificate forgery against Senator Dino Melaye. They also investigated the debatable bulletproof range rover cars which is allegedly owned by the Senate President, Senator Bukola Saraki.

The upper legislative chamber emphasized that the false allegation was generated by the former majority leader due to the conflict between both parties, which now lead to his suspension from the house.

The suspension was recommended to be 1 year of legislative action and some Senators supported this motion on the floor of the Senate. These senators are alleged to have plotted Senator Ndume’s suspension.

senator Jibrin who represented  Kano North made this in his word that : “When we see anything against another Senator, we must bring it to the floor of the Senate before making hurtful statement.”

The senator representing Taraba Central said Saraki, Melaye and the Senate have been wronged as an institution and asked that Ndume apologise to them. He said Ndume relied on reports in the papers. 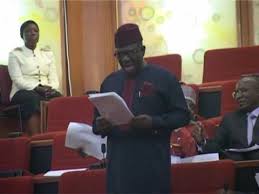 The ethics committee had recommended that Ndume’s suspension should last for 191 Legislative days. But, Uroghide who represents Edo South senatorial district pleaded with the Senate to reduce it to six months.

#COVID19: Voters need to understand that priority placed on health and education across ALL LEVELS OF GOVERNMENT are the most important for social and economic development – Dr Shola Dele-Olowu